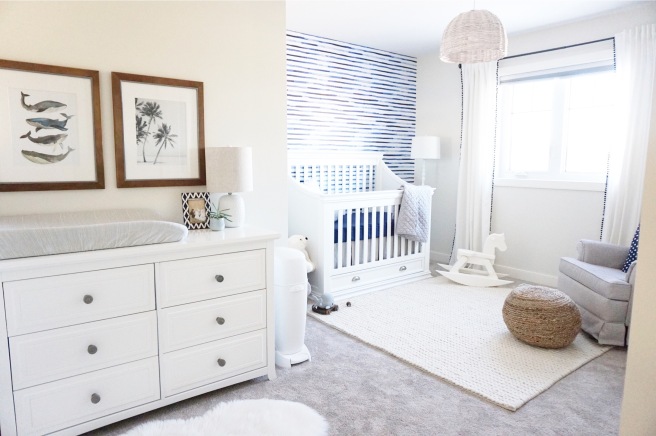 In designing baby brother’s nursery, I knew I wanted to create a room that could grow with him as he grew up. I didn’t start off wanting a blue coloured wall, in fact I started off with quite the opposite. Originally I had pinned inspiration photos in shades of greys, whites and creams. I knew that I wanted to do an accent wall like we had done behind the crib in Miss Lace’s room so I began the hunt for the perfect wallpaper. Once I started looking, I found myself gravitating towards watercolour stripe wallpapers in shades of grey. I ordered a few different samples, but each time I was disappointed as they appeared to look either green or purple once taped to the wall in his room. After searching for a while more with little luck, I ended up ordering a black watercolour stripe sample and a blue watercolour stripe sample from the same company. The black sample looked too harsh and didn’t mix into my neutral and light look that I had originally formed in my mind so it was instantly off the table. I then decided to tape the blue sample to the wall and was surprised to find myself not hating the large amount of colour in brought into the room. I left it there for a few weeks and let myself slowly start to wrap my head around embracing the idea of colour.

As you probably already know, our house does not have much colour except in our daughter’s room. I started to like the idea of adding blue in baby brother’s room since I figured he’d probably appreciate it as he grew up. The stripes seemed simple enough that they could meet my criteria of being used in a toddler’s room and beyond. With a little hesitation I hit click on my computer and decided to purchase the bold, blue stripe. When it arrived, I passed the task off to my hubby. The wallpaper is the peel and stick kind which he was quite excited to try out, but in our opinion, wasn’t as easy as the pre-pasted versions and with the additional costs, didn’t seem worth it. I attempted to help him install it at first, but wallpaper isn’t for the faint of heart so I decided to leave him to it and do what I do best, head out to Homesense to shop for decor items instead. He finished it on his own while I was gone shopping and everyone was happy. 🙂

Once I saw the full look of the blue watercolour stripes on the wall, I felt they channelled an ocean vibe which led me to decide on doing a “grown up” coastal theme for our son’s room. I didn’t want it to be an obvious nautical look with many anchors everywhere but rather have touches of natural elements like wood and rope, along with decor that exhibited exploration, such as boats and whales. I also mixed in other items that I felt fit perfectly into a little boy’s room but that didn’t fit with my specific coastal theme to balance it all out .

In our daughter’s nursery, I had originally used a different brand of diaper pail that I had received as a gift, but I ended up being quite unhappy with it. Around her second birthday we removed it from her room as the smell was too much and no matter what we did, we couldn’t get rid of the stench. Since then, we have been carrying diapers outside into the garage, one diaper at a time. Our house is a two storey and our weather isn’t the warmest during winter, making it quite uncomfortable to have to go frequently outside into the garage. I am also guilty of leaving dirty diapers on dressers, often forgetting to carry them down as my hands are full of kids and stuffies.

Being an ambassador for Playtex Baby™, they offered to send me a Playtex® Diaper Genie® Elite diaper pail to try out in Everton’s nursery and since I was so unhappy with our past situation, I instantly agreed, knowing it could lead to #ForBetterBegininngs with one of my main jobs as a #PlaytexMom: changing diapers! I picked the white colour (shocking, I know) but it is also available in grey, light blue and light pink. I am officially in love with a diaper pail! (You know you’re a parent when you can happily make a statement like that! 😉 ) The diaper pail comes fully assembled and ready to use. It stands high, so tall people such as my hubby, don’t have to bend down to put a diaper into it like other brands of pails. It’s hands free and has a foot pedal that pops the top open which is nice when you’re carrying baby so you don’t have to juggle too many things. Although Miss Lace loves to be my helper with baby brother, her weight isn’t enough to push the pedal, which is a good since I don’t have to worry about her “playing” with it when I am not around. My favourite part though out of everything is how it uses clamps to close off the smell of dirty diapers when you drop them into the pail, making sure no stinky diapers waft in your direction, which was a huge problem with our old one. The bagging system is also genius! When you go to remove the bag of dirty diapers, it seals off the bag before it is tied up, once again keeping odors in as you transfer the bag of dirty diapers out of the nursery.

The white wood crib is the same crib we used in our daughter’s room with the exception of the knobs being different. These are the brushed silver knobs that came with the crib which I had originally swapped out for gold ornate ones to add a girlier touch in Miss Lace’s room. I liked the look of these and felt they suited the coastal vibe so I kept them and didn’t search for anything new. The floor lamp, the rocking chair and rocking horse are all also from our daughter’s nursery.

The cream braided rug anchors the space nicely, adding in a lighter colour over our darker grey carpet. I love the braided look to it and I felt it tied in nicely with the braided jute pouf (which I picked up at Homesense for a steal at $50 I might add!) and the weaved look of the larger storage basket.

The wood side table is from Homesense and when I saw it I instantly fell in love with the detailing of the white washed wood. I felt it tied in nicely with the other wood elements such as the large picture frames above the dresser and the last minute addition on my part, of the round wood shelf above the chair. That shelf was another great Homsense find and I mainly picked it up because I didn’t like how I didn’t have any shelves to display things on his room.

The white dresser is new to our son’s room and is a bit smaller than the one we had in our daughter’s room. The knobs are a darker grey colour that look like faux concrete and were purchased in the US.

The light fixture I found at Homesense and is one of my favourite items in his room. I love the white wood look and how the way it’s weaved mimics the lines in the wallpaper, but I also like that it has a beachy, coastal feel to it. It’s slightly oversized which I also love. I feel like a light fixture can never be too big for a space!

If you had seen my Insta stories I had originally purchased white drapes with navy blue tassel trim from the US but they ended up being too short for his window. I couldn’t find what I was looking for anywhere else so I ended up buying my go to white drapes from IKEA and sewed on some navy pom trim which I bought off of Etsy. I am very happy with how they turned out! They tie into the pom pom pillow in his crib (which is only there for decoration until he starts using the crib) and the navy and white dot pillow on his chair.

I wanted some linen details so I purchased the crib skirt off of RH and tied it into his dresser lamp which has the same colour linen shade. The grey quilt on the side of the crib is also from RH and will be great when he’s older and for his toddler bed one day.

The wicker basket with grey detailing is from Homesense, along with the grey picture frames and rope mirror. Most of the decor items in his closet are also from Homesense. The closet system is an IKEA hack and is the same one we did in our daughter’s room. If you want instructions on how to do it you can find them here.

The wooden play gym and hanging toys/play mat were made by my hubby and I. We used to sell them on Etsy but stopped last year when I returned back to work and life was too hectic. We decided to dust off our machines and pull out our skills one more time to create something special for baby brother.

Overall I am happy with how the space turned out, despite it being COMPLETELY different than what I had originally pictured in my mind when I started this design journey. Sometimes I think you just need to be open to new ideas and let yourself become inspired in different ways along the way! I love the coastal feel to his room and the pop of colour the wallpaper adds, hopefully he feels the same way when he’s older! Below are more pics and a few links to some of the key pieces in his room. 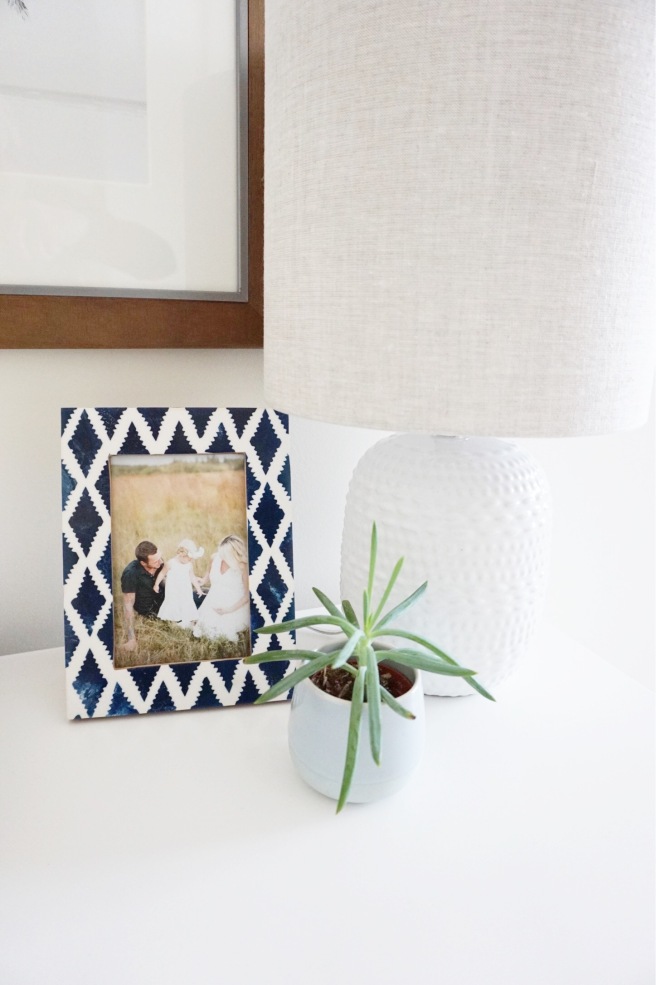 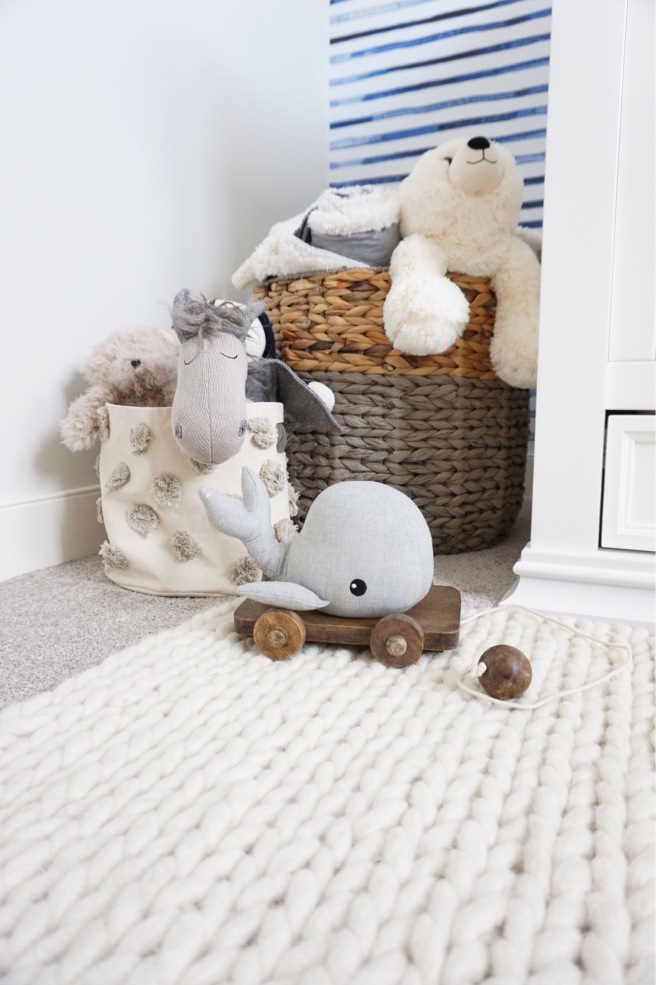 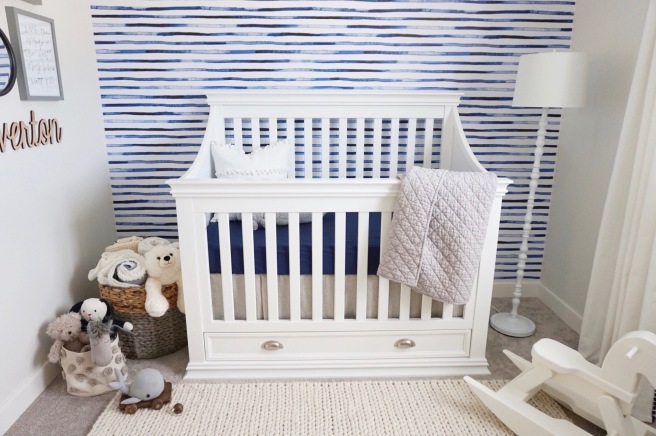 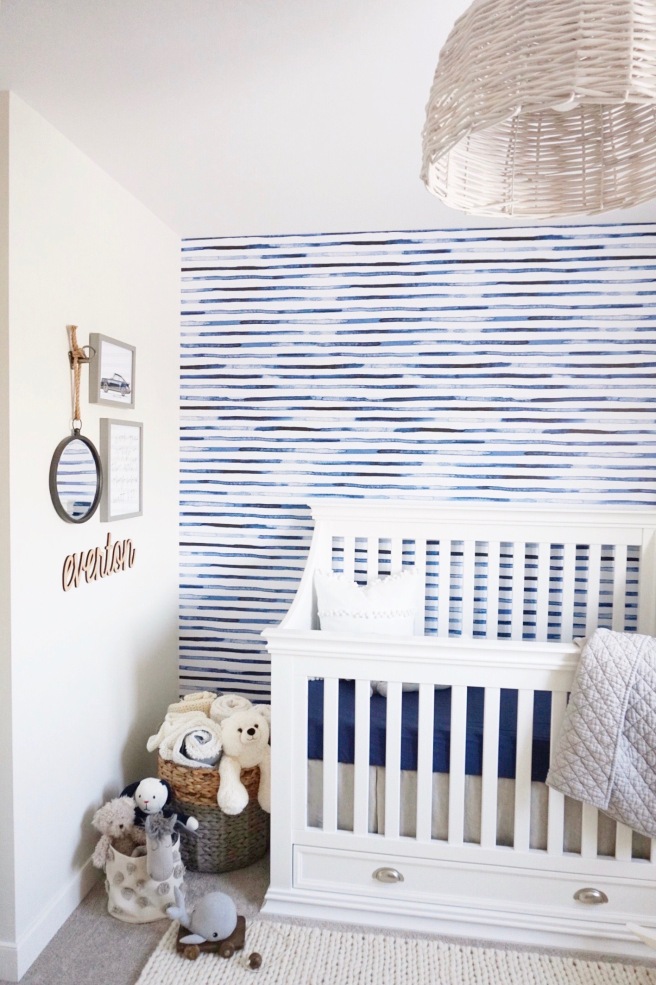 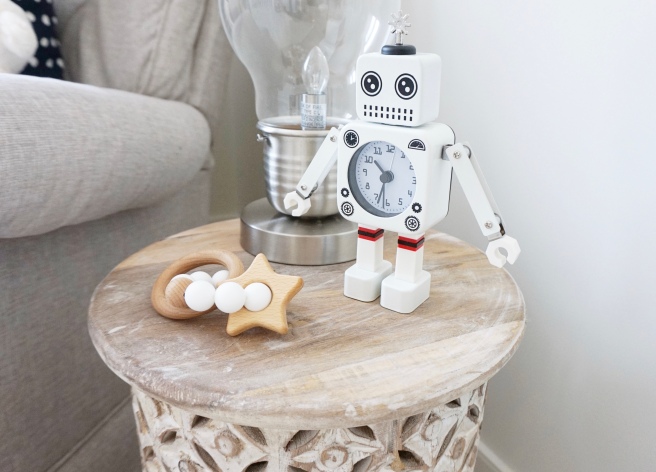 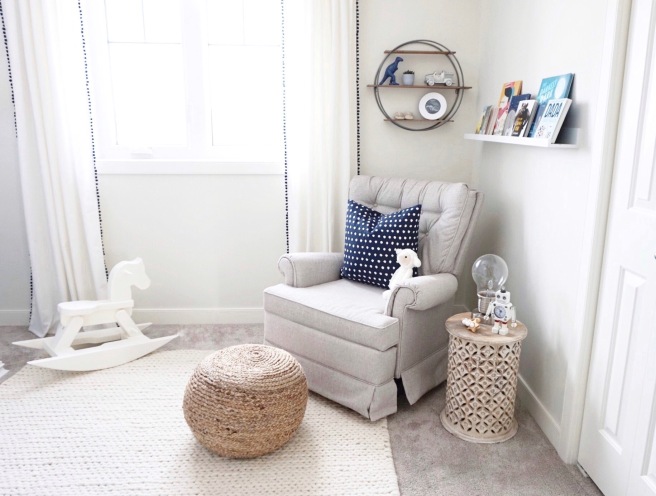 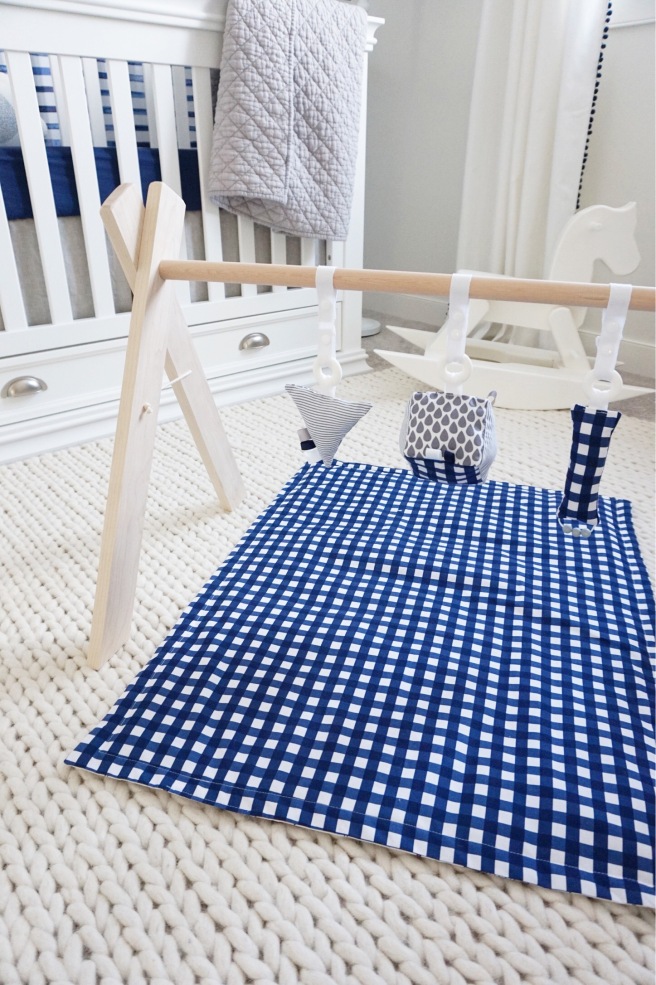 10 thoughts on “A Coastal Nursery Tour”