On September 21, baby brother turned 11 months old! The fact that we are almost at 12 months old already is blowing my mind. This last year has flown by and has been such an incredible experience as I’ve watched my two little ones interact together.

This past month has been one of the top months for us. Everton started to walk fully and is motoring around the house more and more as the days pass! He still typically opts to crawl as he can get around a lot faster that way but he is also incorporating walking more and more into his daily routines. One day he’ll crawl most of the day and the next he’ll spend the majority of his time practicing his balance and taking steps.

Within about one week Ever got three new teeth. The poor guy suffered the most through these three as they all quickly emerged. He got his first two top teeth and a fourth one on the bottom, making for total of eight teeth. There were a few naps that didn’t go very well and a few random wakings in the night during this week but overall, he was a trooper and always put himself back to sleep.

As fall approached I switched baby brother’s meals around and started to incorporate a breakfast item in the morning rather than just milk. He still breastfeeds when he wakes up around 8:00 am but by around 8:30-9:00 am depending on the day I give him yogurt, cheerios or fruit. He now has his baby cereal which he still LOVES mixed with water (as the breastfeeding supply has finally been depleted) and puree for lunch between 12:00-1:00 pm. He still dislikes carrots and will refuse to eat them.

Sissy bear started preschool this past month which meant I had to change baby brother’s nap schedule around to accommodate that. I started to stretch him in the mornings so I could get both of their naps on the same schedule. This meant no more morning nap at 11:00 am and instead keeping him up until about 1:00 pm. He did great with the change and now naps from about 1:00 pm – 2:30-3:00 pm. His nighttime sleep schedule has also changed a bit to accommodate having to be out the door in the early morning. He is now going to bed around 7:30 pm and wakes up around 7:30 am. He then happily hangs out in his crib till about 8:00 am before I get him to nurse him.

In terms of language, Ever is saying his best version of “bye bye” as well as waving as he says it. “Dada”was his first word although the association of the word to his father isn’t quite there yet. Each time I try to get him to say “mama” he ends up saying “baba” happily. It seriously feels like I am living in the Jimmy Fallon, ‘Mama’ book. He has also mastered the word “gramma” so not sure why he’s struggling with mama!

Activity wise, he loves to take off and crawl towards the stairs and climb to the first landing (about two steps up) before he turns around to look for me. Once I approach him he giggles happily at what he has done! He is just starting to open drawers and cupboards in the house but hasn’t done much damage in those areas just yet. 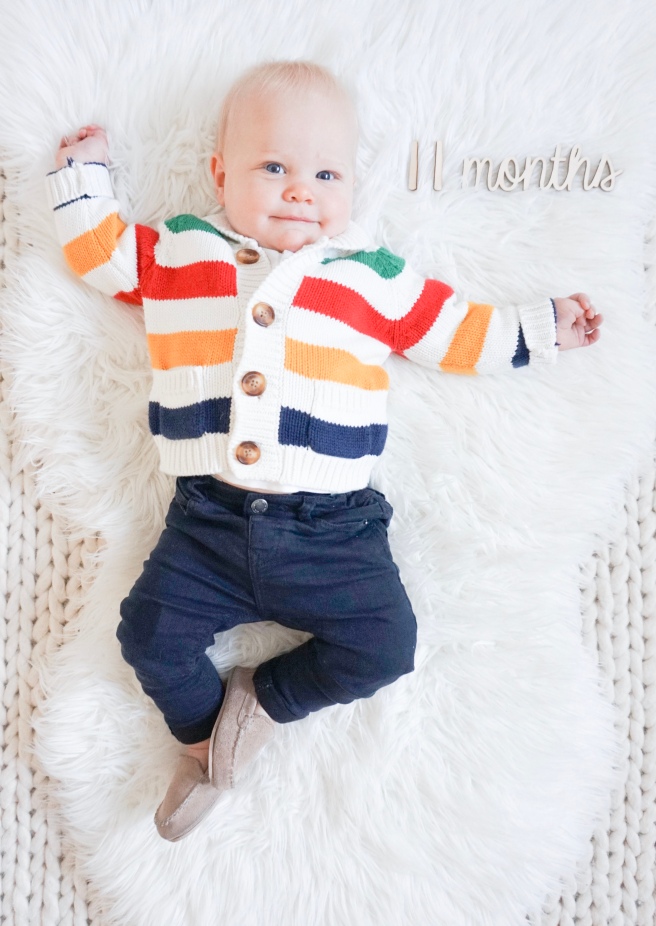 Just came upstairs from the basement and heard my son calling out for me, saying he’s scared. My babes were in a car accident this afternoon with their dad on the way to pick me up from work. Everyone is thankfully okay, just a little shook up. I’m so incredibly grateful for their safety and for kind people who pulled over to let them sit in their car, while they waited for family to come. It’s hard to understand the impact the event had on them, but hearing him call for me right now makes me think it’s more than I had originally thought. Definitely hugging them a little harder tonight. 🤍
Still working on my first mini project for the new year: changing around my front entrance table! I had zero plans to put my new cookbook on it, but I love the binding and the way it looks with everything else, so I might just leave it there.. is that strange? 🤔 I figure it’s current placement shouldn’t bother me too much, as it’s my husband who does most of the cooking anyways! 😆 #luckywife
Missed having my wreaths on my counter stools, so I decided to hang some hearts on them for Valentine’s Day! If you saw my stories from this weekend, I grabbed these wooden hearts at the dollar store and then added my own little touch to them.. best part is, it only cost me $5! 😁🤍💕🤍
CLOSED***GIVEAWAY @monsterjam is coming to @bellmtsplace from January 25 - 26, 2020 and we can’t wait to take this vehicle loving + driving in mud, obsessed little guy to see all the big trucks! 🖤🤍🖤 🤍🖤🤍🖤🤍 I want you to be able to attend too, so I’m giving away 4 tickets to one lucky winner for the Saturday, January 25 show at 7:00 pm! To enter all you have to do is: 1. Follow me - @arlynnjayne 2. Tag as many friends as you’d like in the comments below, limiting one tag per comment please! (Each tag is considered a separate entry) Giveaway runs for 24 hrs from January 16, 2020 - January 17, 2020. Winner will be picked at random on January 17, 2020 at 10 pm CST. Winner will be announced on this post January 18, 2020. This giveaway is in no way sponsored or endorsed by Instagram.
Finished styling one side of my shelves the other night but the other side still has one empty spot. I was challenging myself to find things around the house to put on my front entrance table so I didn’t spend a fortune on all new stuff. Anyone else guilty of doing that? Sometimes the same old decor feels boring to me, but when I move it to a different spot, it feels new all over again! And I guess that worked for the table! But now I have the problem of having to fill an empty somewhere else.. 😂 so not sure how far I got with saving money? 🤔 oh, and I also added in a subtle touch of Valentines to the mantle 🤍
Christmas car pjs + too small summer dresses with a side of bed head + Valentines crafts. These are the days 😊❤️💕🤍
The prettiest macarons that I ever did see! 😍 Had so much fun this morning hanging out with a group of amazing women at the @madaboutstyle brunch! I am so grateful and honoured to be included in such a beautiful event. 🤍 A big thank you to the Mad ladies for hosting such a wonderful morning. I can’t wait to see all the great things unfold for them in the upcoming months! 😘 #brunchwithmad
I’ve got party planning on my mind as I eat my lunch! And I know I should probably be working at posting my son’s 2nd birthday party photos, but instead I’m getting lost looking at my girl’s 4th Mermaid birthday party. I really loved how it all turned out! And I can’t believe she’s going to be 4.5 this month. The months are flying by way too fast! 😭
I’m not one to post of my toilet very often, or ever 🤔, but I realized that I forgot to share this cute, little coastal looking basket I found to hold tp. 😍 Swapped out our white wire one for it because I loved the natural pop against the white shiplap. I also ordered a new soap dispenser this week for the sink. Now I’m trying to decide if I should put up some pictures on this wall? I get major anxiety at the thought of making extra holes in wallpaper, so I can’t seem to make a decision! Anyone other wallpaper lovers get like that? 🤣
All this girl has been playing this last week is “Valentine’s Party for mermaid’s 12th birthday” which means setting up her new tea set, doughnuts, cupcakes, ice cream sandwiches and macarons just so, on her cake stands. Her attention to detail and interest in decorating is quite adorable! I’m convinced she’s mine. 🥰 And she’s convinced that she needs to host a Valentine’s Party in real life too, so I guess I should start planning that?! 🤷🏼‍♀️❤️
%d bloggers like this: