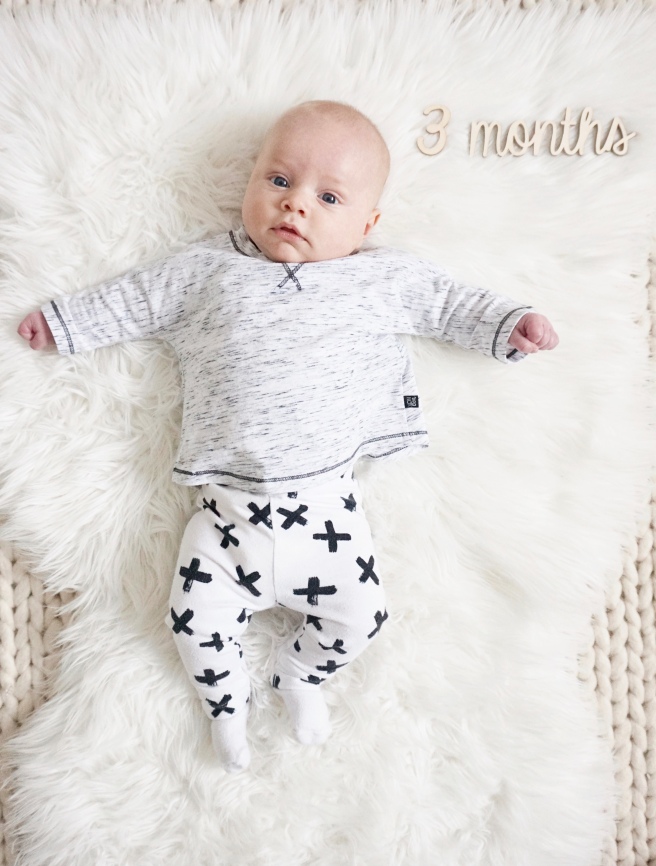 Our little bub hit the three month mark last week. I am not going to begin to apologize for being late on posting this because being late is my new reality and I’m okay with that! What I am not okay with is being late for activities and family gatherings but as I said in my last post we have recently found our groove and are working towards being on time!

This past month Everton has continued to sleep from 11 pm -8 am each night with the exception of 3 consecutive days where he woke up between 5 am -6 am. The only difference during those nights was that he was sick and stuffed up so I’m thinking that might be the reason he woke up. On those nights he went back to bed after his feed until about 9-9:30 am but the majority of days when he wakes around 8 am he will stay up for two hours before he gets tired again. After two hours, he then has an hour or so nap before he wakes again for another feed. In the afternoons he sleeps around 1:30-3:30 on average. For afternoon naps we settle him in our arms and then transfer him into the Mamaroo and it has done wonders just as it did for Miss Lace during her afternoon naps in the early months. We didn’t transition Ems to her crib for naps until 5 months and it wasn’t the easiest experience so I am wondering if we should be trying to transition him sooner than later in hopes that being younger will make it a bit easier. In the evenings, Everton tends to doze off around 8:30 pm and sleeps until I wake him to feed around 10:30 pm before putting him down at 11 pm for the night. Some days he has stayed awake for a lot of the evening and when this happens he tends to be a bit fussier. His nap routines are definitely not as scheduled as Miss Lace’s were by this age, but being the second child we are also a bit more relaxed.

He is still solely being breastfed, and typically eats every three hours. Sometimes he goes about 3.75-4 hours between his morning feed around 8 am and his next feed around 11 am- 12 pm especially if he falls asleep. He is currently wearing 3-6 month clothing but I don’t think it’s going to last long! I predict he’ll be wearing 6-12 month clothes before he reaches the 6 month mark. At his 2 month doctor appointment he was weighing 13 pounds, 5 ounces. His weight and height were both around the 65th percentile and his head circumference was in the 90th percentile.

Drool has increased this past month which leads me to believe teething has officially started. This was about the same time it began for Ems so I am not surprised. The interest in the soother has declined greatly this past month and he appears to bite on it now rather than suck on it. Ems was exactly the same way so once again this isn’t that surprising. Once in a while he’ll still suck on it to fall asleep but not often. He’s fairly easy to soothe overall compared to his sister. Walking with him, holding him standing or rocking him all work within a few minutes. Sometimes he lets out a few cries but a lot of times he quietly drifts off to sleep. This is very different from Ems who needed a large amount of rocking while she screamed her head off to settle.

This month has brought grabbing toys and holding them for long periods. He loves to suck on his hands or especially on blankets. His favourite toy right now is his play gym and he loves to lay under it and stare at his toys. A lot of his mornings are spent here where he will coo and grab at the various toys for almost two hours before he gets bored!

His strength in his legs is great and he is always trying to stand! When I attempt to burp him on my shoulder, he pushes to a standing position. Even when I try to burp him while he is sitting on my lap, he still pushes his legs to stand up; making it very difficult to get the job done! He likes tummy time and has been able to lift his head for some time now. He has rolled front to back once but only when his arm was positioned in a way that allowed for it more easily.

He is such a smiley guy and we are constantly getting grins from him! He coos and “talks” to us lots when we engage him in conversation. He seems to be the happiest when I sing songs with him and move his hands in a clapping motion as he always belts out some half laughs. His sister is loving the development and interactions we are seeing and gets so excited when she makes him smile! I can’t wait for him to be a bit older so she can interact with him even more!

One thought on “3 Month Update”