This Halloween I was really struggling with what I wanted Ems to be. I had a few ideas in mind but had expected her to be walking, so I didn’t feel the ones I had in mind were appropriate for where she was developmentally. I wanted to make sure that she was able to sit comfortably if that was how she chose to  spend the majority of her evening. It turns out that she started to walk confidently right before Halloween but I didnt know for sure at the time how well she would be able to walk, especially wearing a costume! Since we already owned the “little donut” shoes from Joe Fresh and had the donut rattle laying around from when she was a bit younger, a donut costume seemed like an easy costume to start to create.

I converted the rattle into a “bow” by attaching a nylon headband with a glue gun onto the donut rattle so she could wear it on her head. I made sure to glue the headband onto itself so the rattle wasn’t affected in the process. To create the donut around her waist, I purchased just over a 1/2 metre of light beige felt to create the initial donut shape. I folded the fabric in half, as I knew I would need 2 sides to my donut. I measured her waist and used that to figure out how big to make the inner donut circle. Once I traced the inner circle, I traced the outer circle approximately 7 inches away from the inner one, to make the width of my donut. I cut out both sides of the donut and sewed them together with a basic stitch, leaving about 1/4 inch seam allowance. Felt is great and easy to work with as it doesn’t fray and doesn’t require any finishing to the edges. Since you can’t flip a donut inside out, it is important to remember that your seams will be showing. I left about a 3 inch opening on the outer circle of the donut so I had an access hole to stuff my donut. I had initially added an elastic band inside the inner circle of the donut so it could cinch onto Emsley’s waist, but in the end I didn’t like the way the elastic scrunched up my donut shape. I decided to make the shape look nice, I would overstuff the donut so it would smooth back out. I left the elastic inside the donut but it no longer served its purpose.

I placed the already stuffed and sewn beige donut onto the half metre of pink felt I bought to create the icing. I first traced the inner circle onto the pink felt. I then free hand drew my outer icing shape using the outer donut circle from the beige donut as a general guideline. I cut out the shape and hot glue gunned the pink felt onto the top of my beige donut. I then cut out 1 inch by 3 inch pieces of felt in 3 different colours to create the sprinkles. I bought the pre cut pieces of felt for the sprinkles so it would be cheaper than having to buy the usual minimum 1/2 metre per colour. I then placed the sprinkles onto my donut shape and moved them around to get the overall look that I wanted. Once I was satisfied with the design, I hot glue gunned the sprinkles into place. After the glue dried, I sewed up the access hole to my donut.

When I tried my finished product on Ems, I realized that because I had overstuffed my donut to create a nicer shape, I had lost the ability for it to stay on her waist. I decided the easiest way to fix that without giving up my donut shape was to stuff her onesie in her bottom region with cotton stuffing. So if you notice in the pictures she has a Kardashian sized rump under her donut costume, haha! It did the trick though and she was able to waddle her way around in her costume. The bonus was, is that when she sat down she had extra padding under her bum! This costume allowed her to be very mobile and comfortable all evening. It turned out to be the perfect Halloween costume for her current developmental stage and boy did she ever look scrumptious! 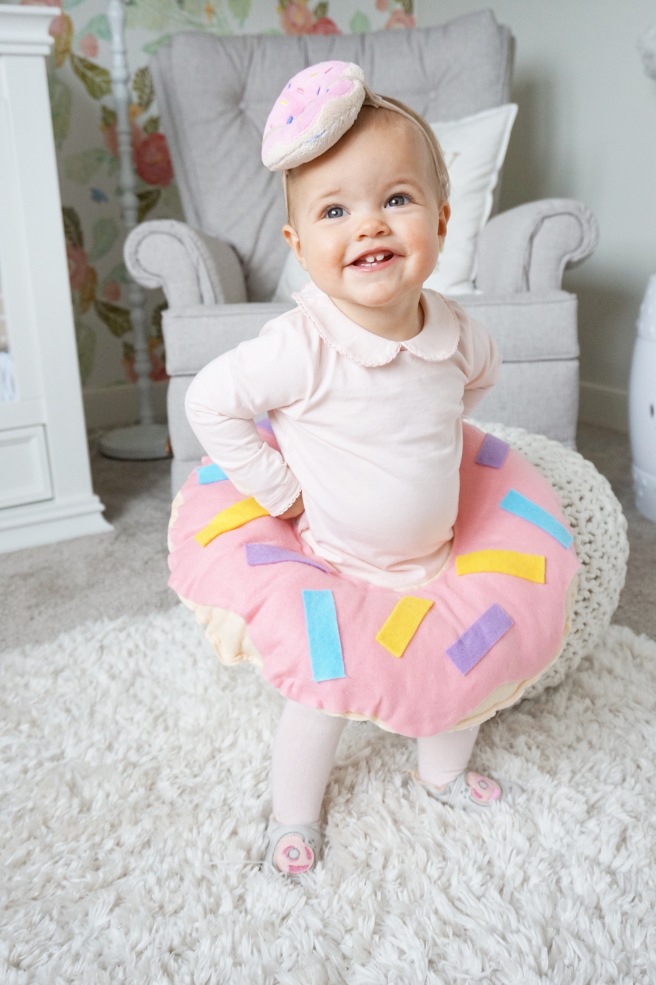 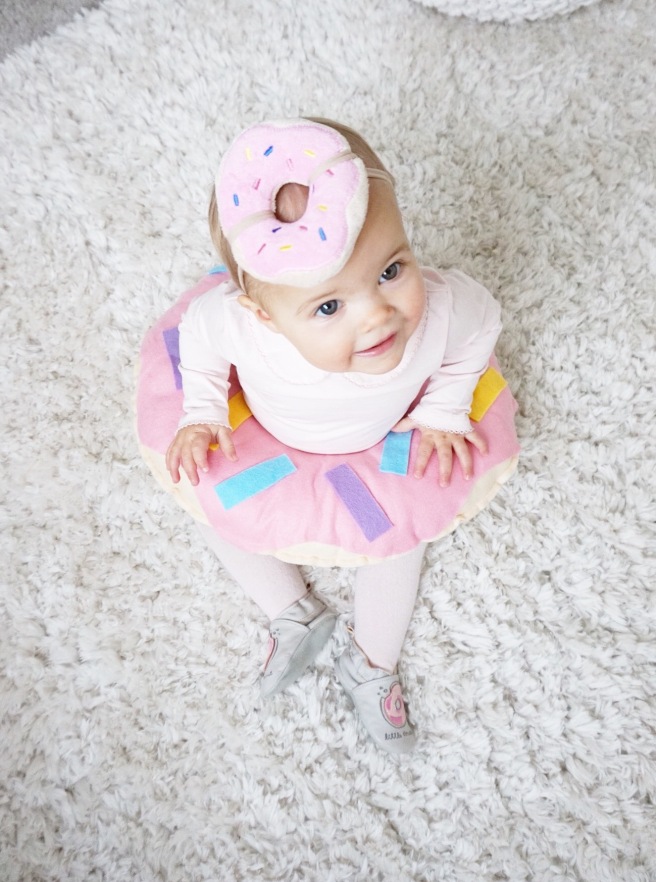