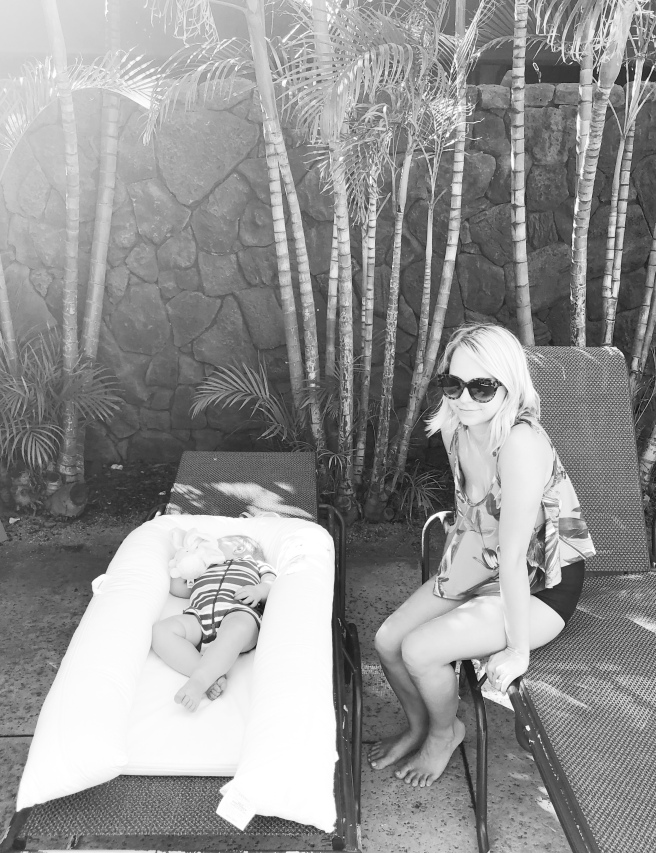 One of the not-so-great things we experienced last time when we went to Hawaii with our daughter who was 19 months old at the time, is that we spent a lot of our afternoons stuck in our hotel room. During her naps, we felt confined to our hotel room’s balcony, trapped and unable to move about freely while she was sleeping. For this trip, we ended up booking a suite which gave us a bit more freedom to move about the room when either of the kids were napping. However, with two kids napping at once, it still presented with challenges. On days that both kids were exhausted, we probably could have napped them together in the same room. However, the majority of the time our daughter sings and talks herself to sleep for about twenty minutes to half an hour before she finally falls asleep. Putting the kids together in the same bedroom to nap with our daughter’s loud voice, left baby brother delighted by his sister’s antics and not wanting to lay down and therefore attempt to sleep. Because of this, we had one sleeping in a bedroom and the other one in the main room. Also, with their current ages, our daughter only naps for about an hour in the afternoons whereas our son naps once, up to three hours at a time. With his naps still being longer, we knew we were going to be stuck in the hotel room for the entire afternoon, just as we were during our previous trip with our daughter. I’ve seen some people use their strollers by the pool as a place for their kids to nap but I wasn’t sure if this would work for our son as he often sleeps on his side.

After doing some research, I decided to try out a DockATot for this nap time predicament! I understand that it is not sold for this purpose but I figured with my direct supervision, I wanted to give it a shot. I received the product compliments of DockATot and ended up getting the larger one, the DockATot Grand Dock, which is meant for 9-36 months of age (there’s also a smaller one available for 0-8 months of age). I picked the Pristine White colour which may not surprise you, because I am always a fan of neutrals! It’s machine washable, so I wasn’t worried about the white colour getting dirty. My main purpose for the DockATot was to be able to offer a napping area for our son outside so we could be outdoors as a family as much as possible. My hope was, if I could get him to nap next to us by the pool in the DockATot, then we wouldn’t have to go inside a hotel room during that gorgeous afternoon Hawaiian sun! The reality is, we invest a lot to be on vacation in the warmth and although my husband is always happy to let me lay in the sun and therefore go inside during our kid’s nap times, he would still prefer to be outdoors and we would all still prefer to be outside together!

I ended up trying the DockATot Grand Dock a couple of days into our trip (it got lost in flight transportation..) with great success! Our son snuggled in and was able to fall asleep very fast. He was very content and cozy while sleeping in there. It’s made of 100% natural cotton and is fully breathable. I placed the DockATot on a lounge chair next to me under the shade of some palm trees. I always made sure that I could be in arms length from him during the entire time he was in it. Obviously, with him being raised up about two feet from the ground, safety could be a concern, so I made sure that I was always right next to him. I was always able to touch him while he slept in the DockATot to ensure he was safe.

For transportation purposes, we could easily check the Dock A Tot in the oversized area by using the DockATot Grand Transport Bag. Since it’s designed for this exact purpose, it’s a perfect fit for the Dock and the best way to transport it, especially on an airplane. It obviously keeps the Dock clean but it was also a great carrying bag to bring down whatever we needed to the pool area for his nap. I would throw in his lovey, his sleep sack, some wipes and a clean diaper before I carried it all down in the transport bag.

I got sooooooo many comments, questions and compliments on how well the Dock was working for us for naps by the pool. As I was carrying the Transport Bag down to the pool area one day, I even had a mom and grandma, who were trapped on their balcony during their kid’s/grandkid’s nap (Boy, do I know about that!) talk to me about how smart the DockATot was! It’s so light and easy to bring along that I would definitely do it again. I’m very happy with how well it worked for my son’s outdoor nap times! Not to mention, my daughter loved snuggling in it during the day in the hotel room! 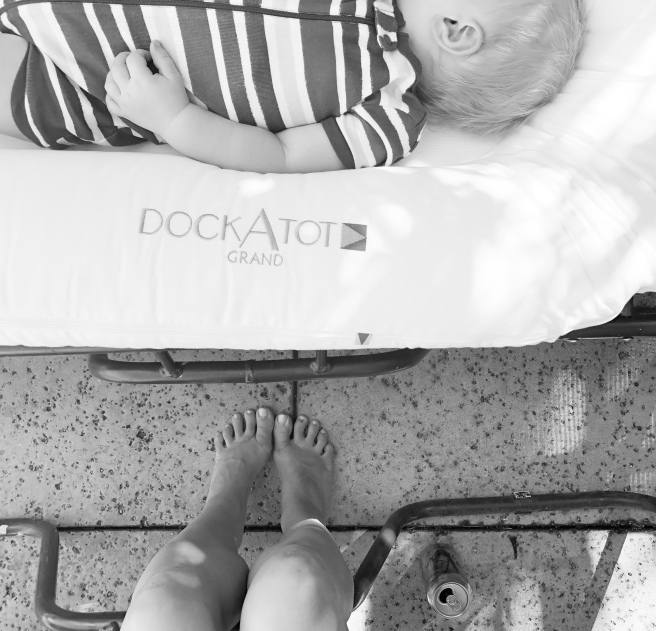 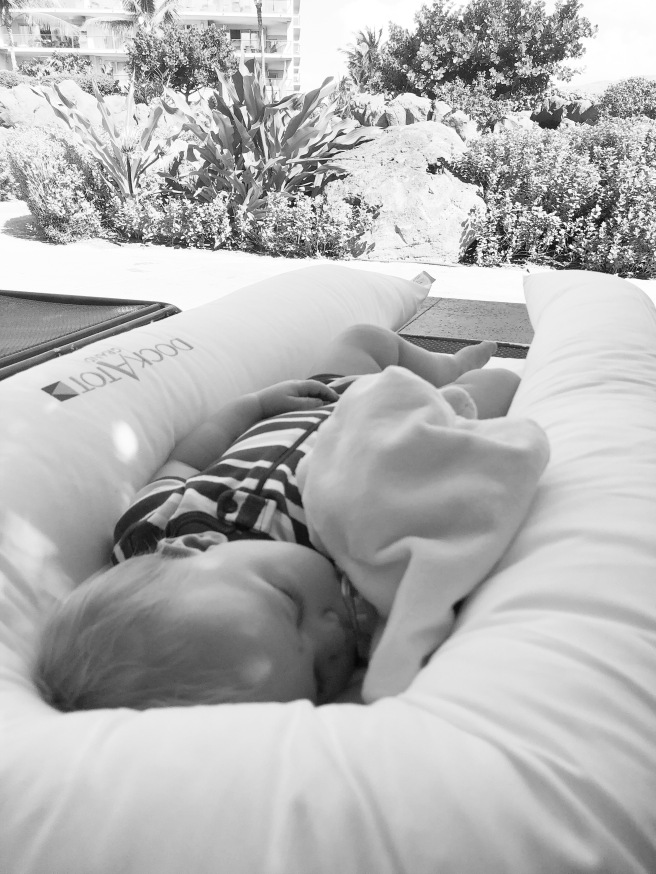 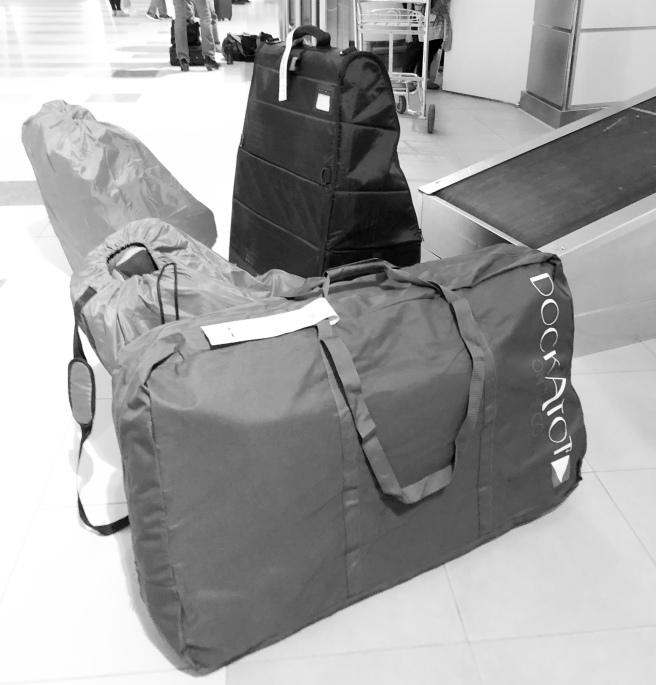 One thought on “Vacation Nap Time”